Cynthia Rowe was born in Melbourne, Australia. Graduate of Melbourne University, she has taught secondary and tertiary French and English in both Victoria and New South Wales. She has been awarded the degree of Writing Fellow of the Fellowship of Australian Writers NSW Inc.

She has spent time in France and the French territories, getting to know these places well, and was awarded a Diplôme Approfondi de Langue Française by the French Ministry of Education.

She has been broadcast on National Community Radio. 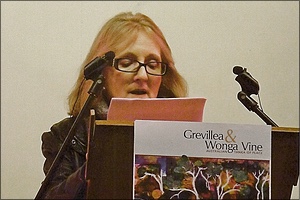 Her play, Not the Vice-Chancellor, was performed in the Short and Sweet Festival Sydney 2008.

Cynthia’s hobbies are reading, gemology, SMSing her friends and watching French programmes on the satellite dish.

Pleased to be published in Creatrix 57 — a lovely issue: new hearing aids frogs beneath gran’s window

1 3
Also in Failed Haiku #78: campfire the bushman flips a turtle

1
Published in Failed Haiku #78: how hotly this peppermint tea burns my lip at his disdain